First, consider the dimension of a line. (Notice the blue line). A line can be divided into n separate equal sized parts. For example:  Each of those parts is 1/n the size of the whole line and each part, if magnified n times, would look exactly the same as the original.  For a line, ln(number of divisions) = ln (n1).  (Where the exponent is the dimension number). 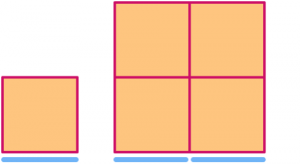 Now, for a square — Repeating this process shows that a square can be divided into n2 parts, so that ln(number of divisions) = ln(n2).     When scaling it by a factor of 2, its area increases by a factor of 22= 4

A cube has dimension 3. When scaling it by a factor of 2, its volume increases by a factor of 23= 8. Each of the n3 pieces would be 1/n the size of the whole figure.  For a cube, ln(number of divisions) = ln(n3). So, the larger cube consists of 8 copies of the smaller one!

Each of these diagrams shows the first few steps of construction of the figure.

Imagine the iterations being carried on indefinitely.

The Koch Snowflake would have infinite perimeter.

Here are just a few examples of how fractals appear in a wide range of natural situations.

Mandelbrot’s early work discussed the difficulty of measuring the coastline of Britain.

Fractals can also be used to create realistic “copies” of nature, for example, as landscapes and textures used in video games or computer-generated movies. The water, mountains and clouds in this image are made entirely by a computer, with the help of fractals!